skip to main | skip to sidebar

This was my freshman year film at Calarts (1998). It's about a young student in love with his teacher.

This film is particularly close to my heart because each time I watch it, I remember all the work, discovery and joy at watching my characters come to life. I also remember learning the art of animation with my friends at school. Those were the days!
Posted by chris chua at 4:54 PM 22 comments: Links to this post

"The Gift" was my second year film. Its about a young boy who learns to fish with his grandfather. Basically about being young and experiencing the world through fresh eyes seen through the point of view of someone older and wiser.

Out of all my films, I feel that this was my favorite just because of the look and the message of it. It's also the only film of mine in "color". When I watch it, I can recall how hard it was to finish just because I threw out so much animation that I simply wasnt happy with. It was also the first time I stayed up consecutively for two days to get the film turned in on time....There was a real sense of accomplishment when it was finally finished.
Posted by chris chua at 5:01 PM 30 comments: Links to this post

"The Heist" is my junior year film at CalArts (2000). It's about a bumbling theif who robs a museum only to have his plans spoiled by an old security guard.

This was the year that I felt everything "coming together" for me as a filmmaker. Animation was still a struggle but for the most part, just really fun. It was also the first film of mine to be done on "widescreen" thanks to my then story teacher, Mark Andrews, who pushed me to use scope for a more stylistic-looking film. All in all, this film was an homage to Chuck Jones and the Looney Tunes sensibilities of filmmaking.
Posted by chris chua at 5:06 PM 7 comments: Links to this post 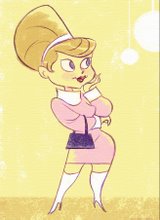